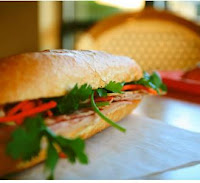 If you are unfamiliar with Bánh mì then you don't know what you're missing. The website "Battle of the Banh Mi" describes these sandwiches beautifully.

"Vietnamese baguette sandwiches, called Bánh Mì, have attracted a loyal fan base like never before. Like a musical band with rock star status, these sandwiches have an almost cult-like following of epicurean devotees. The uniqueness of these sandwiches not only lies within the french influenced baguette, but it’s also the flavor packed, savory Viet fillings that what makes the marriage of the two main ingredients a true love affair....


It starts with a Viet style french baguette...Inside the length of the cut baguette...a great banh mi should have luscious, Viet flavored fillings such as pork prepared in numerous ways... Other common ingredients used to finish the sandwich often are: liver pate, homemade mayo, touch of soy sauce, shredded pickled carrots & daikon, fresh cilantro, jalapeño heat and crispy cucumber slices. Most any of these condiments may be omitted since, banh mi are nearly always made to order.."

How surprised was I when reading a New York Times article yesterday and they mentioned my favorite Portland Bánh mì spot - Best Baguette.

"...in Portland, Ore., 82nd Avenue (the “Avenue of Roses”) is home to Best Baguette, where top-notch banh mi is served in a reclaimed former chain restaurant. Don’t let the drive-through scare you away; the place is family owned, all the bread is baked in-house, and the banh mi thit nuong — barbecued pork and pâté – comes slathered in savory yellow garlic aioli. Try yours with a paper cup of fresh-pressed sugar cane juice." 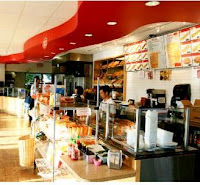 I live only a few blocks from Best Baguette and the first few times I drove by I was a little put off by the bright blue trim and the drive thru option. It just screamed "Fast Food"...but really what it is, is Good Food done Fast.

Finally, my curiosity took control.
The sign outside saying "French-Asian Sandwiches" just was too enticing.

Boy was I ever glad I did.
Hot fresh baguettes baked every hour, so you always get one that's warm and fresh. The crisp outside with an almost gooey yet fluffy inside.

The real boost for me was that they give you the option of vegetables on the inside or outside of your sandwich.


"Ingredients are mixed and matched at the whim of the kitchen, but there’s a common denominator to all banh mi — a bright, crunchy vegetable slaw made with daikon radish, shredded carrot and fish sauce (nuoc cham), accompanied by sliced jalapeño pepper and fresh cilantro."

While I like a little kick to my food, I'm not a fan of the jalapeño pepper. It's not the heat but the flavor I don't care for. So having the option to pick and choose how much cilantro or having the opportunity to design my own daikon radish to carrot ratio is fantastic. 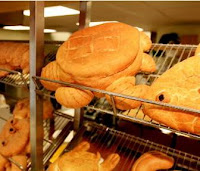 One of my other favorite thing about Best Baguette is they are also a bakery. You can buy these crisp warm baguettes to bring home with you (they've also sold me their little baggies of pickled veggies for $1/bag). But the bakery doesn't end there. Buns, croissants, cakes, napoleons, and the best chocolate eclairs I've ever had (outside a French bakery).

The list just goes on and on about this place...but the real star is their Bánh mì and personable friendly staff. Really, I don't go as often as I should (should = would like to).

I do recommend finding a Bánh mì restaurant near you (tip from Battle of the Bánh mì - they should never cost more than $6) and next time you're in Portland stop by Best Baguette.
Email Post
Labels: Asian New York Times Portland review