Article: Insects as Food? Trying to Change ‘Ick’ to ‘Yum’ 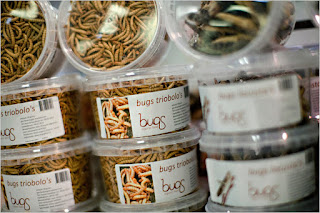 A bright, engaging man, Mr. Van Dongen is head of the meat department at Sligro, a kind of Costco on the edge of this trim Dutch town. Besides steaks, poultry and others kinds of meat, he offers mealworms, buffalo worms, locusts and other insects, as well as prepared products containing insects like Bugs Sticks and Bugs Nuggets — not for pets, but as a source of protein for people.
On a recent afternoon he arranged two sample stands, one with chunks of chocolate laced with ground mealworms (larvae for a type of beetle), another with various kinds of whole insects for munching, including worms and crickets, in small plastic containers.
At a nearby stand with a Dutch name that translated roughly as the Tasting Garden, there were more insects than garden. While shoppers gazed with puzzled looks, Mr. Van Dongen, 41, warmed up portions of an Asian vegetable dish with crickets mixed in.
Silvia van der Donk tasted some, raised her eyebrows and smiled approvingly.
Her daughter Melanie, 21, recoiled. “I ate locusts once,” she said. “I didn’t like the texture.” 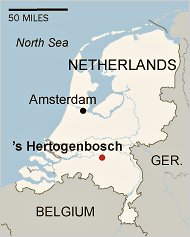 The efforts of Mr. Van Dongen and Sligro, a chain of 25 membership-only warehouse stores throughout the Netherlands, are part of a drive to convince the Dutch that crickets, worms and caterpillars are healthier sources of protein, and are less taxing on the environment, than steaks and pork chops.
Dutch breeders of insects, who until now have supplied the market for pet food — insects for geckos and other lizards, salamanders, newts, frogs, birds or fish — have jumped at an opportunity to open a new market and have founded a trade organization to promote the idea. The government is backing them, and last year it appropriated $1.4 million for research into insects as food, to prepare legislation governing insect farms, health and safety standards, and marketing through retail outlets.
“The risky part is: How can we move this product upscale?” said Marian Peters, a public relations expert who is the organization’s general secretary, munching on Mr. Van Dongen’s insect-laced chocolate.
To be sure, the idea is not new. Entomologists in the United States have promoted the idea for decades and produced a newsletter and even cookbooks with titles like “Creepy Crawly Cuisine.”
The Dutch take the food business seriously. One of the world’s largest food companies, Unilever, has roots here, and the Netherlands, though a small country, is a major exporter of food products, including vegetables, meat and fish.
Moreover, it has the backing of the United Nations Food and Agriculture Organization, which warns that the production of meat like beef and pork as sources of protein taxes the environment, estimating that almost one-fifth of all greenhouse gas emissions comes from livestock. 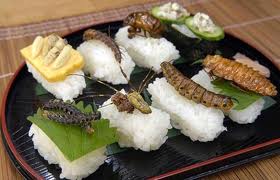 Ms. Peters stresses that insects are already a major source of protein elsewhere in the world. Caterpillars and locusts are popular in Africa, wasps are a delicacy in Japan, crickets are eaten in Thailand. Yet in Europe, as in the United States, most people, except some very young children, consider them, well, pretty disgusting.
“I have a friend who came to look with her 2-year-old daughter,” said Marieke Calis, 29, who with her parents and sister Margje, 31, raises about 14 different kinds of insects, including mealworms, buffalo worms (larvae for another kind of beetle) and crickets on a four-acre farm an hour from here.
Dipping a hand into a tray of her buffalo worms feels like immersing it in a bowl of warm pasta, except that the pasta squirms. “The daughter plunged her hands into a tray of worms, and was delighted,” Ms. Calis said. “The mother was horrified.”
When Manon Houkes, 18, strolled by Mr. Van Dongen’s tasting garden at Sligro recently with her grandparents, Hans and Jenny Klop, Ms. Houkes would not taste the Bugs Nuggets, a concoction of 80 percent ground chicken and 20 percent ground mealworms, that Mr. Van Dongen was preparing. “No, it’s yuck,” she said, curling her lip. 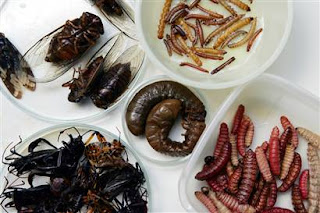 Her grandmother tasted, and approved. “It’s like whole wheat,” she said. “Slightly fatty.”
Arnold van Huis, an entomologist at Wageningen University who advises insect breeders and the government, said, “The Netherlands wants to be in the forefront of food.”
“I was working in Niger teaching farmers how to control locusts,” Mr. van Huis said. “Then I realized that the farmers earned more from the grasshoppers they took from their millet than from their millet crop itself.”
He acknowledged that Europeans did not relish insects as food, though he said it was an acquired abhorrence.
“Children have no problem eating them,” he said.
Michel van de Ven, 38, and his brother Roland, 40, have been raising insects for 12 years, the last six of them in a large brick barn once used for growing mushrooms. They export 40 percent of their stock to pet shops in Britain, Germany, Portugal and elsewhere; only 1 percent or less goes to supermarkets.
Michel van de Ven sees potential for insects as human food, if customers are not told what is in the product in the beginning. “But later,” he said, “people will have learned to eat it.”
His brother sees an obstacle other than distaste — price.
“Wholesale, insects are similar in price to beef now,” Roland van de Ven said, citing the labor-intensive farming methods used. “Locusts are more like caviar.”
Margot Calis, 62, who works with her daughter Marieke on the farm, which employs 10 people, agreed. “The price of insects is much too high,” she said. “There is lots of manual labor involved, and it is too expensive.”
Mr. Van Dongen of the Sligro chain thinks the investment is worth it, though he admitted: “It will take four to five years; people must get used to it. It’s all in the mind.” 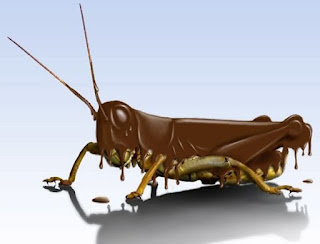 Most of his customers are restaurants, cafes and snack bars. To attract individual shoppers, he places his insect-laced chocolate samples where they will be encountered first. Only then does he display his samples of insects.
“When they see the bugs, they’ve already eaten them in the chocolate,” he said. “Some people scream, ‘Oh, my God!’ But if you do it once, then you do it twice.”
Email Post
Labels: food New York Times