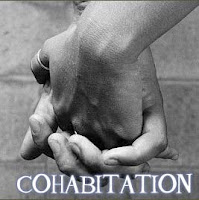 I stumbled across a USA Today article (below) about cohabitation and I was a little perplexed... although I suppose that's what I get for reading an article in USA Today (News-Lite). Read the article first and I'll have my thoughts at the bottom.
*     *     *

Couples who live together before marriage and those who don't both have about the same chances of a successful union, according to a federal report out Tuesday that turns earlier cohabitation research on its head.
The report, by the National Center for Health Statistics, is based on the National Survey of Family Growth, a sample of almost 13,000. It provides the most detailed data on cohabitation of men and women to date.
Past research — using decades-old data — found significantly higher divorce rates for cohabitors, defined as "not married but living together with a partner of the opposite sex." But now, in an era when about two-thirds of couples who marry live together first, a different picture is emerging in which there are few differences between those who cohabit and those who don't.
Of those married 10 or more years, 60% of women and 62% of men had ever cohabited; 61% of women and 63% of men had cohabited only with the one they married. Meanwhile, 66% of women and 69% of men married 10 years had never cohabited.
Differences "are there, but they are not huge," says statistician Bill Mosher, the report's co-author.
Sociologist Pamela Smock of the University of Michigan in Ann Arbor considers the data definitive. "On the basis of these numbers, there is not a negative effect of cohabitation on marriages, plain and simple," she says.
Paul Amato, a sociologist at Pennsylvania State University, says the new data suggest that "maybe the effect of premarital cohabitation is becoming less of a problem than it was in the past. If it becomes normative now, maybe it's not such a big deal."
The report takes a closer look at those who live together before marriage, including race and ethnicity, education level, upbringing and whether couples were engaged when they moved in.
"There's a real difference in the types of cohabitations out there," Mosher says. "We can show that now with these national data."
The data show that those who live together after making plans to marry or getting engaged have about the same chances of divorcing as couples who never cohabited before marriage. But those who move in together before making any clear decision to marry appear to have an increased risk of divorce.

Men who were engaged when they moved in with their future spouse had about the same odds that their marriage would last at least 10 years as those who didn't live together before the wedding: 71% for engaged men and 69% for non-cohabiting men. Among engaged women, the probability the marriage would survive for 10 years was similar (65%) to the probability for women who didn't cohabit (66%).
That's a finding Scott Stanley, co-director of the Center for Marital and Family Studies at the University of Denver, sees in smaller samples. For Stanley, the "nature of commitment at the time of cohabitation is what's important."
"There is a lot of interesting work being done on differences among different groups of cohabitors as to why, when and how they cohabit," he says.
But others who are firmly against cohabitation, such as Mike McManus, co-founder of Marriage Savers, a "ministry" that aims to reduce the divorce rate, calls the findings worrisome
"I think it's going to lull some people into thinking there's no problem with living together," says McManus, co-author of Living Together: Myths, Risks & Answers. "It appears to say you can cohabit and it doesn't matter, but it doesn't look at all the couples who begin cohabiting and how many of them are able to make a marriage last. It doesn't say how many marriages broke up" before 10 years.
Although the new federal data were from a 2002 survey, it's the most recent nationally representative sample of 12,571 people ages 15 to 44, including 7,643 women and 4,928 men.
Andrew Cherlin, a sociologist at Johns Hopkins University, says the report may quell fears of cohabitation "as a long-term substitute for marriage," as in some European countries.
"American cohabitors either marry or break up in a few years," he says.
*     *     * 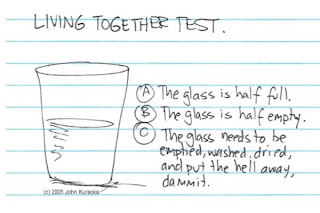 What an odd way to end the article. A quote by a sociologist who is only mentioned the last two sentences of the article. And what a defeatist statement!?
Sure the one time I "cohabitated" we broke up somewhere between 1 1/2 and 2 years of being together. That was also far from a traditional living-together situation (I was 16/17 living at home with my family and he was a freshman in college who lived with us on the weekends and holidays).
But then there's my cousin and her husband. They were high school sweethearts and dated/lived together for over 20 years before they finally got married.
Obviously every relationship is different...
There are exceptions to every rule...
Etc...
Etc...
Etc...
Personally I've always liked the idea of cohabitation before marriage. You can learn so many new quirks about your partner that you wouldn't by just dating. You learn he never puts his socks in the hamper but leaves them balled up in his sneakers. He learns you never rinse the toothpaste out of the bathroom sink. When you're dating these are the little things we don't realize (or try to hide from our partners).

What do you think?
Have you lived with a partner?
Did you live together before you got married
or did you wait?
Email Post
Labels: happiness life marriage