I came across this article about a new iPhone application that's been created. It's Called "Last Night Never Happened". The concept is that you can use this app to delete (presumably drunken) regrettable comments from Twitter and Facebook.
However, the article doesn't discuss the fact that there is no such thing as "permanent" deletion when you're talking posting online. It's there out in the wonders of interweb land for future reference (and subpoenas). Not to mention from my understand you can't delete a Tweet. It can be deleted off your home page but it still shows up in other people's feeds.
I feel sorry for people who think this is a Get-Out-Of-Jail-Free card.
*     *     *
Morning-after app lets you pretend last night never happened
By Rosa Golijan
Some of the things you've done during a crazy night out will haunt you for the rest of your life, but — thanks to a new iPhone app — tweets and Facebook messages posted during a moment of questionable judgment will no longer be too worrisome. 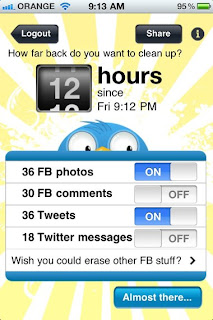 The way the app works is simple. All you have to do is securely sign in to your Facebook and Twitter accounts and select the timeframe you wish to clean up — you can choose anything between the last one and 48 hours.
Once you've done that, the app will show you how many photos, comments, tweets and messages fall within your chosen timeframe and allow you to select which type of items you want to delete. After you decide on that and hit a button to continue, you'll be given the option to type a replacement message, which will be posted after your social networking posts from last night are little more than bad memories.
Enter that message and you'll be asked to confirm twice more that you're really sure that you want to erase the past few hours. Tap through those prompts and — tada! — it's like last night never happened. Unless someone managed to take some screenshots.