Seafood supplies in northern Japan were devastated by the tsunami that destroyed the region’s fishing fleets and aquaculture farms as well as the ports themselves. The Japanese daily Asahi Shimbun reported on Tuesday that fishermen in the area are living in shelters, transportation to the famous Tsukiji market in Tokyo is not possible, and there is no ice to keep fish fresh.
So far, this grim picture is not causing serious shortages in American sushi bars, but how the situation will evolve remains to be seen.
“It has definitely affected the market,” said Jack Lamb, an owner of Jewel Bako in the East Village, where most of the fish is imported from Japan. But he said that the restaurant had made adjustments and was now buying fish from Kyushu Island in the south, far from the affected area, and was obtaining mackerel and octopus from sources in the United States. 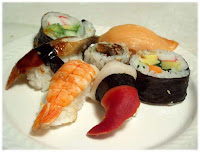 Nobuyoshi Kuraoka, the owner of Nippon, a restaurant in Midtown, wrote by e-mail from Tokyo, where he was on business, that the “striped jack, yellowtail, sniper fish, sea eels and others are coming from Fukuoka on Kyushu Island through Korean airlines.”
Tadashi Ono, the chef and a partner at Matsuri in Chelsea, also said he is buying from Kyushu, as well as from Australian and New York waters. “Today fish comes from all over the world, so we’re O.K.,” he said.
There have been reports that restaurants and hotels in Asia and elsewhere have canceled all shipments of fresh produce from Japan after radiation turned up in products like milk and spinach.
But restaurateurs in New York said they import almost no fresh produce from Japan. They have also said that their customers do not seem worried. At Sushi Yasuda in Midtown, Scott Rosenberg, an owner, said that just a few customers have asked where the fish was from and whether it was safe. As for produce, he said that occasionally the chefs bring in highly specialized seasonal items, but it’s not the season now.

“We have great microgreens and all those things growing here,” said Richie Notar, a partner in the Nobu chain. “We don’t need to buy from Japan. We have California.” But he is keeping an eye on the supply of imported dry goods, including rice, nori and bonito flakes. “We’re starting to develop other sources, like South Korea, for some of these,” he said. “Our wholesalers have warehouses that are stocked, but who knows what the situation will be in six months in terms of availability or even safety from radiation?”
Reika Alexander, the owner of En Japanese Brasserie in the West Village, said: “We must keep buying what we can from Japan. We need to support Japan now.”
Email Post
Labels: article fish Japan New York Times Sushi