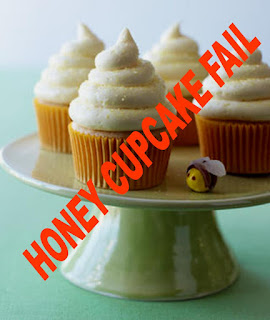 I don't know what it was but this was a cupcake FAIL! I realize that most recipes found in cookbooks aren't tried out before being published but I found this on someone's blog/website.
The cakes came out way too dense...I'm talking could have built a brick house if I wanted too. The frosting was too buttery tasting if you ask me. I know BUTTERcream frosting but I think there was too much.
I don't know what happened but we ended up giving most of them away and the few that were left at home we ended up tossing out.
I will post the pictures anyway, because while I thought they tasted sub-par they did look pretty (pics coming soon). However, I will not be posting the recipe. I don't want to be blamed for anyone mistaking it as a recommendation.
Email Post
Labels: cupcake honey recipe review