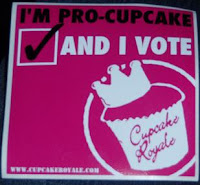 Thank you to everyone who voted on the Cupcake Poll.
The (voted) winning cupcakes were:
First Place: Boston Cream Pie Cupcakes
Second Place: Chocolate cupcakes with PB frosting
(Tied) Third Place: Lemon Kiwi Cupcakes and Almond Joy Cupcakes
I have made the Almond Joy Cupcakes (which went over very well with my taste-testers) and the Boston Cream Pie Cupcakes (which bombed in a way. The recipes I used just weren't that impressive).
I'm not sure if the Kiwi one's are going to work out. I'm just worried that the Kiwi is so light and delicate it will be overpowered by the Lemon. 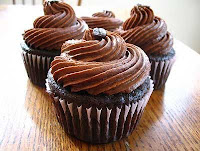 And as for the Chocolate cupcakes with Peanut Butter frosting - I think I'll make these for someone's upcoming birthday but the winner (taste-tester wise) for a Chocolate Cupcake at the bridal shower is the
Mexican Hot Chocolate Cupcake!!
Thank you again to everyone who voted and I'll keep posting pictures as new cupcakes come out of the oven.
Happy Eating!
Email Post
Labels: baking bridal shower chocolate coconut cupcake dessert family fruit Mexican nuts peanut butter poll recipe review sweet