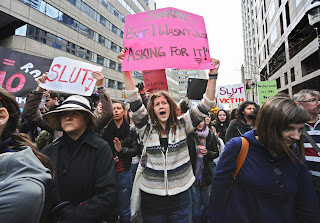 I have breasts.
I have hips.
I have thighs and a stomach.
I have curves I [try to] embrace.
I like to show off my curves with skirts and tank tops.
I like to bundle up in baggy yoga pants and sweat shirts.
He was my boyfriend.
It was not violent.
It was over quicker than it started.
I still don't identify as a rape "victim"
I'm tired of labels.
I'm tired of hearing the term "asking for it"
I didn't ask for it and I've only been with 2 men.
Yet, according to some [police officer below] I'm a slut and I was asking for it.
*     *     *

In fishnets and stilettos, t-shirts and jeans, a three-piece suit and a birthday suit, hundreds of self-proclaimed “sluts” marched through downtown Toronto Sunday afternoon, protesting a police officer’s suggestion that women could avoid sexual assault by not dressing provocatively.
Polly Esther walked off the subway in a plunging neckline and knee-high platform boots to join the noisy, spirited march from Queen’s Park to police headquarters on College St. She raised a hand-lettered sign, its simple but stark message definitive of that of the protest: “Xmas 1985. 14 years old. Bundled in layers. How did I deserve it?”
“It has nothing to do with what you’re wearing,” said Esther, 39. “And I’m living proof of that.”
SlutWalk, as organizers coined the march, was a response to comments made by a Toronto police officer during a safety forum at York University’s Osgoode Hall Law School in late January. Const. Michael Sanguinetti is said to have told the room that “women should avoid dressing like sluts in order not to be victimized.”
Sanguinetti has since apologized to the university and been investigated by the professional standards unit. He was disciplined internally, the details of which have not been made public, and is still on the job in 31 Division, though not working Sunday.
Police were quick to publicly condemn Sanguinetti’s comment, saying it is counter to what officers are taught about sexual assault. In a statement sent to the SlutWalk organizers and the media last Friday, Chief Bill Blair said the remarks “place the blame upon victims, and that’s not where the blame should ever be placed.” 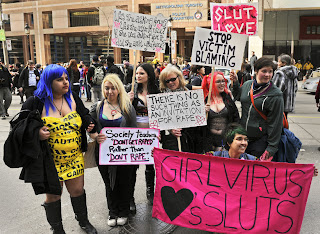 “If that type of, frankly, archaic thinking still exists among any of my officers, it highlights for me the need to continue to train my officers and sensitize them to the reality of victimization,” he said.
But SlutWalk organizers made it clear Sunday that they are not satisfied with the response.
Co-founder Heather Jarvis said the group made three requests from police: to restructure training and education, implement existing third-party recommendations on that training and education and improve public outreach programs, with an emphasis on consent and “rape myths.”
“They didn’t actually respond to a single one of our requests,” Jarvis said.
The group also invited police to address Sunday’s crowd alongside speakers like Jane Doe, the activist who successfully sued the police after she was assaulted by a serial rapist and is still highly critical of procedures around sexual assault training and investigation.
“It’s not about one bad apple cop,” Doe told the cheering crowd. “It’s about an institution that is permeated with these kinds of notions and beliefs.”
Spokeswoman Const. Wendy Drummond said police did provide SlutWalk organizers with an outline of changes made to training and investigations in the wake of a 2010 review, the second since the Auditor General’s 1999 report on police procedures around sexual assault. 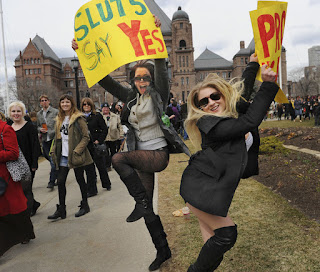 “We have reached out to them,” Drummond said. “But wanting to put us up there and not be heard, is just not something that we’re going to do.”
Future SlutWalks are planned in other cities, including Vancouver, Ottawa and Boston.
http://www.thestar.com/News/GTA/article/968466
Email Post
Labels: 20-something 30-something adulthood article dating embarassment happiness humor identity lessons life love rape self-reflection sex slut