A friend had this link to this article on her facebook this morning. I had no idea that I would be sitting at my desk holding back laughter and nodding my head, in agreement with the author, as I read. LZ Granderson hits it on the head when he asks the question about what is going through the heads of marketing teams creating these products and what is going through the heads of the parents purchasing these items for their little ones! 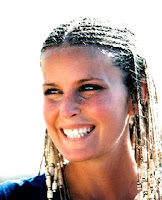 Her beautiful, long blond hair was braided back a la Bo Derek in the movie "10" (or for the younger set, Christina Aguilera during her "Xtina" phase). Her lips were pink and shiny from the gloss, and her earrings dangled playfully from her lobes.
You can tell she had been vacationing somewhere warm, because you could see her deep tan around her midriff thanks to the halter top and the tight sweatpants that rested just a little low on her waist. The icing on the cake? The word "Juicy" was written on her backside.
Yeah, that 8-year-old girl was something to see all right. ... I hope her parents are proud. Their daughter was the sexiest girl in the terminal, and she's not even in middle school yet.
Abercrombie & Fitch came under fire this spring for introducing the "Ashley," a push-up bra for girls who normally are too young to have anything to push up. Originally it was marketed for girls as young as 7, but after public outcry, it raised its intended audience to the wise old age of 12. I wonder how do people initiate a conversation in the office about the undeveloped chest of elementary school girls without someone nearby thinking they're pedophiles?
Push-up bikini controversyVideo
What kind of PowerPoint presentation was shown to the Abercrombie executives that persuaded them to green light such a product?
That there was a demand to make little girls hot?
I mean, that is the purpose of a push-up bra, right? To enhance sex appeal by lifting up, pushing together and basically showcasing the wearer's breasts. Now, thanks to AF Kids, girls don't have to wait until high school to feel self-conscious about their, uhm, girls. They can start almost as soon as they're potty trained. Maybe this fall the retailer should consider keeping a plastic surgeon on site for free consultations.

We've been here with Abercrombie before -- if you recall, about 10 years ago they sold thongs for 10-year-olds -- but they're hardly alone in pitching inappropriate clothing to young girls. Four years ago the popular "Bratz" franchise introduced padded bras called "bralettes" for girls as young as six. That was also around the time the good folks at Wal-Mart rolled out a pair of pink panties in its junior department with the phrase "Who Needs Credit Cards" printed on the front.
I guess I've been out-of-the-loop and didn't realize there's been an ongoing stampede of 10-year-old girls driving to the mall with their tiny fists full of cash demanding sexier apparel.
What's that you say? Ten-year-olds can't drive? They don't have money, either? Well, how else are they getting ahold of these push-up bras and whore-friendly panties?
Their parents?
Noooo, couldn't be.
What adult who wants a daughter to grow up with high self-esteem would even consider purchasing such items? What parent is looking at their sweet, little girl thinking, "She would be perfect if she just had a little bit more up top."
And then I remember the little girl at the airport. And the girls we've all seen at the mall. And the kiddie beauty pageants.
And then I realize as creepy as it is to think a store like Abercrombie is offering something like the "Ashley", the fact remains that sex only sells because people are buying it. No successful retailer would consider introducing an item like a padded bikini top for kindergartners if they didn't think people would buy it.
If they didn't think parents would buy it, which raises the question: What in the hell is wrong with us?
It's easy to blast companies for introducing the sexy wear, but our ire really should be directed at the parents who think low rise jeans for a second grader is cute. They are the ones who are spending the money to fuel this budding trend. They are the ones who are suppose to decide what's appropriate for their young children to wear, not executives looking to brew up controversy or turn a profit.
I get it, Rihanna's really popular. But that's a pretty weak reason for someone to dress their little girl like her.
I don't care how popular Lil' Wayne is, my son knows I would break both of his legs long before I would allow him to walk out of the house with his pants falling off his butt. Such a stance doesn't always makes me popular -- and the house does get tense from time to time -- but I'm his father, not his friend.
Friends bow to peer pressure. Parents say, "No, and that's the end of it."

The way I see it, my son can go to therapy later if my strict rules have scarred him. But I have peace knowing he'll be able to afford therapy as an adult because I didn't allow him to wear or do whatever he wanted as a kid.
Maybe I'm a Tiger Dad.
Maybe I should mind my own business.
Or maybe I'm just a concerned parent worried about little girls like the one I saw at the airport. 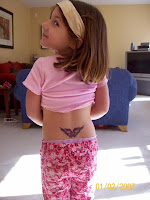 In 2007, the American Psychological Association's Task Force on the Sexualization of Girls issued a report linking early sexualization with three of the most common mental-health problems of girls and women: eating disorders, low self-esteem and depression. There's nothing inherently wrong with parents wanting to appease their daughters by buying them the latest fashions. But is getting cool points today worth the harm dressing little girls like prostitutes could cause tomorrow?
A line needs to be drawn, but not by Abercrombie. Not by Britney Spears. And not by these little girls who don't know better and desperately need their parents to be parents and not 40-year-old BFFs.
The opinions expressed in this commentary are solely those of LZ Granderson.
Editor's note: LZ Granderson writes a weekly column for CNN.com. A senior writer and columnist for ESPN The Magazine and ESPN.com, he has contributed to ESPN's "Sports Center," "Outside the Lines" and "First Take." He is a 2011 and 2010 nominee and the 2009 winner of the Gay and Lesbian Alliance Against Defamation award for online journalism and a 2010 and 2008 honoree of the National Lesbian and Gay Journalists Association for column writing.

*     *     *
While I am a big supporter of freedom of expression. Freedom to dress yourself however you want. I am also a big(ger) supporter of letting kids be kids. They grow up quicker than we realize without social media and marketing pressuring them to get their faster.
Email Post
Labels: adulthood aging article beauty children humor