One Size Fits Nobody

I read this and had oh so many thoughts along the way. So to make it easiest I'm going to just color my thoughts/comments as you read along.
One Size Fits Nobody: Seeking a Steady 4 or a 10
By Stephanie Clifford

In one store, you’re a Size 4, in another a Size 8, and in another a Size 10 — all without gaining an ounce.
It’s a familiar problem for many women, as standard sizing has never been very standard, ever since custom clothing gave way to ready-to-wear.
So, baffled women carry armfuls of the same garment in different sizes into the dressing room. They order several sizes of the same shirt online, just to get the right fit. I often times refuse to buy online just because I don't have the chance to try clothes on first - and I don't want to be out the shipping costs. However, then I'm reduced to the limited number of clothing stores/styles/options for plus size women that don't include online shopping.

Now, a handful of companies are tackling the problem of sizes that are unreliable. Some are pushing more informative labels. Some are designing multiple versions of a garment to fit different body shapes. Lane Bryant has this with their pants/jeans. You're either a "square", "triangle" or "circle"...of course I'm none of the three. I've gone in with the same pair of pants in the three different shapes and there's always something not right. Too much sag in the butt, too tight in the stomach, makes my thighs look bigger around then my hips. Etc. And one is offering full-body scans at shopping malls, telling a shopper what sizes she should try among the various brands.
“For the consumer to go out and navigate which one do I match with is a huge challenge, and causes frustration and returns,” said Tanya Shaw, an entrepreneur working on a fit system. “So many women tie their self-esteem to the size on the tag.” Sadly this isn't just because of the frustration of poor labeling. Thank you media.
As the American population has grown more diverse, sizes have become even less reliable. Over the years, many brands have changed measurements so that a woman who previously wore a 12 can now wear a 10 or an 8, a practice known as “vanity sizing.”
In men’s clothes, the dimensions are usually stated in inches; women’s clothing involves more guesswork.
Take a woman with a 27-inch waist. In Marc Jacobs’s high-end line, she is between an 8 and a 10. At Chico’s, she is a triple 0. And that does not consider whether the garment fits in the hips and bust. (Let’s not get into length; there is a reason most neighborhood dry cleaners also offer tailoring.) The length issue is also one of my biggest issues (aside from finding cute clothes in my size). "Averages" are usually at least four inches too long and sometimes petite's turn into high-waters! I'm only 5'1"-5'2" but this shouldn't be that big of a deal.

Ms. Shaw, the entrepreneur, is chief executive of a company called MyBestFit that addresses the problem. It is setting up kiosks in malls to offer a free 20-second full-body scan — a lot like the airport, minus the pat-down alternative that T.S.A. agents offer. Oh great. One more piece of invasive radiation filled equipment to scan our bodies.
Lauren VanBrackle, 20, a student in Philadelphia, tried MyBestFit when she was shopping last weekend.
“I can be anywhere from a 0 at Ann Taylor to a 6 at American Eagle,” she said. “It obviously makes it difficult to shop.” This time, the scanner suggested that at American Eagle, she should try a 4 in one style and a 6 in another. Ms. VanBrackle said she tried the jeans on and was impressed: “That machine, in a 30-second scan, it tells you what to do.”
The customer steps into a circular booth, fully dressed. A wand rotates around her, emitting low-power radio waves that record about 200,000 body measurements, figuring out things like thigh circumference. <- No thanks. I don't need to know how round my thigh is. Thank you though.
Next, the system matches the customer’s measurements to clothes in its database. MyBestFit currently measures clothes from about 50 stores, including Old Navy, Eddie Bauer and Talbots.
Customers then receive a printout of the sizes at each store that ought to fit the customer best. The retailers pay a fee when they appear in the results, but they cannot pay to be included in the results; the rankings are based solely on fit. (The company saves the data, with ID numbers but not names, and may give aggregate information to retailers as feedback.) 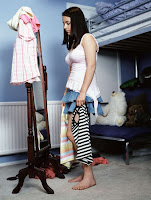 Don Thomas, who manages the Eddie Bauer store at the King of Prussia Mall outside Philadelphia, said the system was helpful to shoppers. “Nine times out of 10, if left on their own, they will choose the wrong size pant,” he said. With a printout, “if it says they’re a 4 or a 6, they’re a 4 or a 6, generally. So it’s really good for the customer who’s time-starved, which we all are.”
Ms. Shaw says there are plans for 13 more scanning machines in malls along the East Coast and in California by the end of the year.
The sizing variations are a big contributor to $194 billion in clothing purchases returned in 2010, or more than 8 percent of all clothing purchases, according to the National Retail Federation.
The scanners are a modern solution to an old problem. Studying dress sizes in Vogue advertisements from 1922 on, Alaina Zulli, a designer focusing on costume history, found clothing sizes have been irregular for decades.
A woman with a 32-inch bust would have worn a Size 14 in Sears’s 1937 catalog. By 1967, she would have worn an 8, Ms. Zulli found.
Today, she would wear a zero. I'm sorry but maybe it's because I've never been a size "zero" but I don't know how this can/is a size!?
Plenty of people have tried to address these arbitrary sizes. Advocating a labeling system called Fitlogic over the last few years, an entrepreneur, Cricket Lee, discovered just how difficult it is to change manufacturers’ approach to size.
Her labeling system divides women’s bodies into three shapes, straight, hourglass or bottom-heavy, and a Fitlogic label carries both the standard size and the shape. What about those of us that are two of the three? Or not 100% of any one?
Ms. Lee did tests in the mid-2000s with manufacturers like Jones Apparel and retailers like Nordstrom. But retailers said consumers had trouble grasping the concept. “The manufacturers were so afraid of producing more than one fit in the very beginning,” she said. And that my friends is why we have the muumuu in many plus size stores.
Still, she said, she will soon try to sell the sizing system again.
Some brands are taking their own approaches to make the fitting room less demoralizing. Mary Alderete, vice president for women’s global marketing at Levi’s, said, “When we try on 10 pairs of jeans to buy one, the reason you feel bad is because you think something’s wrong with you.”
Last fall, the company introduced Curve ID, a line that offers three styles, depending on how rounded a woman’s backside is — slight, demi and bold. (Levi’s is now testing a fourth style, called supreme curve.) Each of the three styles includes about 29 fits and colors, and dozens of sizes. Ms. Alderete said the company had sold more than one million pairs of the Curve jeans.
Marie-Eve Faust, the program director of fashion merchandising at Philadelphia University, called the Levi’s effort “a good start.”
“The next step is to have the major players sit together, manufacturers, retailers, brands, and say ‘This type of label should be appropriate for all of us. Let’s standardize,’ ” she said.
Dr. Faust said she had been discussing a new kind of label that takes into account the wearer’s shape, but expected retailers to bristle.

Still, Dr. Faust said, change is needed. This is something I have to agree on. The fact that an obscene number of women are walking around with the wrong bra size on - you can only imagine how many are squeezing into a too tight of dress because they're "always a size 8" or drowning in pants that make them look like they've got a loaded diaper because "they are comfortable".
“It would be nice just to take the pant, look at the label and say, ‘That should fit me,’ ” she said.
Email Post
Labels: adulthood article beauty body breasts clothes fashion plus size women