(According to Hollywood at least)
Finding Mr Right: 7 Tips from the Movies
by Michael Moran
There’s a lot of talk about what the meaning of life might be, but everyone really knows it’s romance: Finding Mr (or Miss) Right and raising a few kids is the principal motivation for every living thing from mushrooms to monarchs.
Sometimes,though, it’s hard to find the right partner. Sometimes it’s hard to find any partner. Naturally the geniuses of cinema are on hand to show us how it’s done.
1. FIRST FIND YOUR TERRORIST
Far and away the best method of building a lasting relationship is to be involved in some kind of hostage drama or dangerous cross-country chase. From The 39 Steps through to Speed – indeed as far as Speed 2 – young men and women have been finding their true love at the point of a gun.
Gunfire and peril is such a reliable relationship builder, in fact, that it can reunite estranged couples just as well as it can forge new ones: Just take a look at the most recent Indiana Jones film. Or Die Hard. Or Die Hard 2.
2. LOSE YOUR SCRUPLES
If you’re serious about romance, there’s no place for morals. Sham weddings are a great way to kick-start a marriage. Sandra Bullock’s top relationship tip is to order a subordinate to marry you. She’s demonstrating that one right now in current cinema release The Proposal. It’s by no means a new idea: Gerard Depardieu and Andie McDowell first hit on the fake marriage ploy way back in 1990 with Green Card. It’s as sound a foundation for lasting love as it was then.

Don’t be coy, either, about underhand tactics to eliminate a potential rival. Back in 1937 The Awful Truth showed how shabby acts can ease the way for true love. It also featured a really sweet dog.
In the classic Howard Hawks comedy His Girl Friday Cary Grant repeatedly gets his ex-wife’s fiancé arrested on trumped-up charges until the poor chap sees reason and withdraws from the fray. If you’re serious about settling down with your dream man or woman, make sure you enlist a few corrupt cops.
3. PLAY HARD TO GET
The grass is always greener on the other side, forbidden fruit tastes the sweetest and,(although it’s not strictly relevant) a stitch in time saves nine. Nobody wants love handed to them on a plate, it’s unsanitary for one thing, and Hollywood has shown this time and time again.
From the firecracker bickering of classic screwball comedies such as It Happened One Night or The Lady Eve to the tongue-tied predictability of How To Lose A Guy In 10 Days . Julia Roberts proved in I love Trouble that even irascible bears like Nick Nolte can fall for a girl as long as she’s rude enough.
4. DON’T BE FUSSY
We’re conditioned by stories like Cinderella and Snow White to believe that there’s one true love out there for us all. Unfortunately, as the manufacturers of moisturising creams the world over like to remind us, we won’t look this good forever. Sooner or later it’s time to settle. When Harry Met Sally is a perfect lesson in how to win at romantic musical chairs: try to find The One but always keep your backup spouse close to hand.
If you still haven’t dated anyone by the time you’re 40 don’t hold out for perfection – learn from The 40 Year Old Virgin and hook up with the first person that shows even halfway willing. Best advice of all comes from the latest Katherine Heigl effort The Ugly Truth (above). He may be an ill-mannered misogynistic boor but he’s still a man, dammit and once you’ve passed thirty that’s good enough.
5. BE A NERD 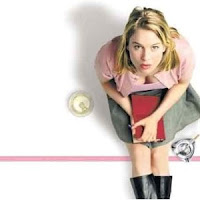 Of course romance comes easily to nerds. The movies tell us that again and again. We’ve already discussed The 40 Year Old Virgin, where a dysfunctional shut-in with minimal cool marries super-groovy Catherine Keener. Bridget Jones’s Diary extols the irresistible appeal of the female klutz. Annie Hall ups the ante by bringing two entirely different grades of nebbish together in one majestic loser romance.
6. BE LUCKY
If you can’t be a nerd, be lucky. Whether it’s something as unlikely as winning a lottery (It Could Happen To You) or an everyday piece of good fortune like being selected to write the lyrics for a guaranteed Number One single even though you’re just a gardener (Music & Lyrics) there really is no substitute for sheer good fortune. If you don’t have luck, make some – pitch up at a stranger’s wedding. Never fails.
7. WHEN ALL HOPE IS LOST, GET A PROFESSIONAL IN
You wouldn’t dream of rewiring your own house. Unless you’d eaten a lot of cheese before bedtime or something. So why organize your own relationships? If we’ve learned anything from Pretty Woman, it’s that common street prostitutes are generally wholesome, marriageable young women. Experts in leaving home (Failure To Launch) and relationship counsellors (Hitch) will definitely marry you as long as you pay them a lot of money first.
You should engage your professional with caution though: if The Wedding Planner has a message for us it’s this: the woman you hire to help you pick out some flowers will probably run off with the groom.
Email Post