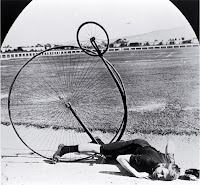 It feels like forever since I've been on the "dating scene" and I'm feeling a tad rusty.
It is certainly not like riding a bicycle!
...Although perhaps it is, I never could keep my balance and ride further than a few feet without either crashing into a fence or going head over heels into a bush.
But here I am back on the horse (how many analogies can I put into one blog?); having recently signed onto a dating site (more on that later)
The friends I have talked to about me rejoining the world of singles have all been supportive in their own ways. Some tell me not to rush things (Mr. Hong Kong and I have only been split up a month) while others are eager to play wing(wo)man and devil on my shoulder. The one thing they all have in common is wanting to make sure I do what I need to do for myself.
And I am.
Part of me is wanting to just connect with someone on some level.
Get a drink after work...
Cuddle while watching a movie...
Hold hands while walking down by the river...
I need to remind myself that Mr. Hong Kong wasn't/isn't my last chance for happiness.
...I know that sounds self-deprecating and awful but we all have those moments of doubt after a break up. When we worry that we just let "the one" slip through our fingers.
So here I am, a month later, trying to figure out how to be 'single'.
I don't mean the "be happy being alone" type of single. I mean the not in a long term, serious, monogamous relationship type single.
I'm just not sure I know how....?
You know what it feels like. It's like that scene in MIB2 where Tommy Lee Jones character goes to the video rental place to find out he never used his membership card, put a video on hold but never check it out....
Except I feel like my membership card has expired and I'm pretty sure I never put anything on hold.
Email Post
Labels: boyfriend breaking up dating friends happiness movie single