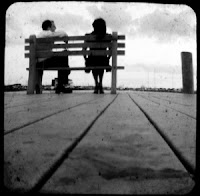 As you know, I rejoined the dating world recently....as for when I became "single" again that's up for debate...but the point is I hoped back on the dating wagon.   And I'm wondering has anyone ever found themselves repeating a dating pattern?
I'm not talking about always dating brunettes or people with blue eyes; I'm talking about patterns of behavior, of choice, and of consequences.
CBS News had a segment back in 09 about "Breaking Your Disastrous Dating Patterns" with Dr. Diana Kirschner, author of "Love in 90 Days: The Essential Guide to Finding Your Own True Love," and the they list the "Most Common Deadly Dating Patterns"(why is the news always so over dramatic?).  Of these "Deadly Dating Patterns" I suppose I fall into all four....
"Every woman falls into terrible patterns, Kirschner observes, adding that, if any woman looks at past relationships, she would fall into one or more of these categories: "The Hermit," "The Flameout," the "I Will Make You Love Me," and the "Not Perfect, I Will Pass."....well now, I do not believe that every woman falls into terrible patterns.I do believe that lately I'm starting to see patterns in my own dating.

Not necessarily "bad" patterns...unless I think too long on it and then I see them as self-destructive and they take on the form of giant brick walls guarding me...keeping me from being "really" hurt (whatever the hell that means).
They're possibly patterns of avoidance, falling for men thousands of miles away, patterns of men who fall hard and quick for me as I them, patterns of falling for Mr. (Feels) Right too quick.
I'm trying to keep my options open....not deleting my dating site account, not snubbing anyone who might email me, or those who I have been emailing with....but I have met someone. Someone who stirs things in me I haven't felt since Mr. Hong Kong and I first started dating.

I know that these could very easily be because Mr. Connecticut is playing to my more traditional sides by asking permission to call me....Sickening sweet I know but I'm a sucker for sweet and traditional. (Also, can I just interject here that Mr. CT has called me every day for the past five days? More than Mr. Hong Kong ever did...not that I'm here to compare men/relationships)
My concern is that he's nearly 3,000 miles away. I feel that I'm developing a pattern of falling for non-local men so that I don't have to worry about the person-to-person closeness/intimacy.
Yes, I found him on a website for people who are and prefer plus size folks....
Yes, he's expressed the fact that I am very much his type (both mentally and physically)....
Yes, he is very much my type (mentally and physically -  within the limitations of what we know about each other at this point)....but that's just my point!
Why couldn't I find a man "my type" here in Portland?
Why am I repulsed, time and time again,
by the men who express interest in me locally?
Am I being too picky?
Am I being not picky enough?
Email Post
Labels: article dating internet dating Long Distance Relationships men plus size rejection relationships