I need to rant here for a moment so I hope you don't mind..... and if you do, well that's too damn bad and you can just move along.
*               *                 *
Now, I will start off by saying that my last entry was about Mr. CT and since writing that blog I have told him how I feel and am now wearing my heart on my sleeve. Did I call him up and say I want you to be mind? No. Did I email him like a nervous little school girl, rambling about how I like him and don't want to put labels on what and who we are but that I like him and am not interested in "dating" anyone else? You bet I did!
Hello World, my name is Morgan and I have a giant yellow streak down my back when it comes to expressing my feelings to men.
So it's been put out into the Universe and now I'm just waiting to see what happens.... aside from the Universe plopping a sexy handsome international attorney into my lap two days ago.  Oh, and did I mention he's local? And by local I mean here in Portland/Vancouver!! Not sure if this is a test to see if I'm really ready for Mr CT and I to be solo or if this is the Universe's way of saying Mr. CT is not the one.... damn you!
*                 *                 *
Anyway, this blog wasn't meant to be a rant about me being a fickly mistress, this blog is about "Common Courtesy" and how it does/should still apply to online dating.
Now I realize that online dating is a lot like speed dating. It's an opportunity to meet a variety of people quickly, all at the same time, and if you don't like what you see across the proverbial table... you move along.

However, I also believe that once you have exchanged a handful of emails, have discussed likes/dislikes, have flirted, have chatted.... it is COMMON COURTESY to say if you are no longer interested! I believe that after all the above it is polite to say "well thanks, but I just don't feel the chemistry" or "good luck on your search but I've found someone local"... Hell I'd accept "I've decided to delete my account and join a monastery!"
The point is - that you would (or at least I hope not) get up from the table, on a f2f date, excuse yourself to the restroom and just not come back. Would you? Most respectable people wouldn't. They'd have that friend call at 7:03 pretending to be an emergency or you'd say "thanks for a nice evening, but I have an early meeting in the morning". Even if you ended the evening with the common dating white lie "I'll call you".... at least you're saying "Goodbye"
There have been two men (three if you count the fact that Mr. CT deleted his online account before we could really get emailing) who have chatted with me for weeks -- series of emails discussing anything and everything... at times perhaps more than if we had been across an actual table sharing drinks after work -- that have just "disappeared" so to speak. 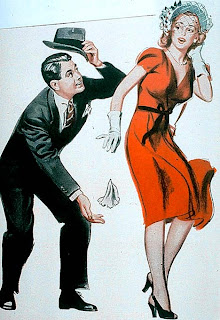 The first one mentioned in his last email he was going camping for the weekend and would email me upon his return. The weekend came and went and no emails. After a few weeks (you can see roughly the last time someone was logged in when you/they have marked each other as a "favorite") I just began to assume he'd been eaten by some starting Canadian bear.  I just looked (prior to this blog) to see if it still listed his last log in as "2+ weeks", NOPE "Earlier This Week"! So his "I'm going camping" and "I'll email you on Monday" was a digital combination of a "bathroom break" and "I'll call you".
The next one literally just "disappeared" and deleted his account... TWICE! The first time I noticed his profile didn't show up under my favs, I figured oh well, we hadn't emailed that often. Then he reappeared one day and sent me an email. His email account had been hacked so he was deleting and recreating various accounts. So we started emailing again, back and forth, multiple times a day. Then this morning *poof* GONE AGAIN.
WTF?!
Now I'm sure both of these men had perfectly "logical" reasons for these occurrences.  But at the same time.... something old fashioned courtesy queen in me says this is FAR from okay. Common courtesy isn't hard. Saying "thanks but no thanks" makes a person feel a lot less like an undesirable leper.
Email Post
Labels: dating internet dating manners online dating