I Scream You Scream

Most of the country has been having more than their fair share of a heat wave this summer - while Portland has had a high of (maybe) 88* so far. It may not be over 100 here but that doesn't mean it's not Ice cream Weather.  (Found in the New York Times Dining & Wine section)

It all started with grasshopper pie. Shockingly green, made from mint chocolate-chip ice cream slathered with crème de menthe-flavored whipped “topping,” it was a specialty of one of our neighbors when I was growing up and a block-party staple. 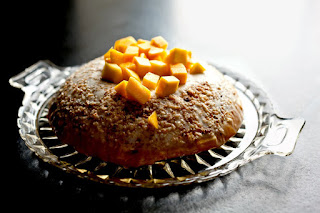 I hadn’t thought of it in years. But it sprang to mind recently while I was trying to transform store-bought ice cream into a party-worthy dessert.

It used to be that a couple of cartons of premium ice cream made a perfectly respectable end to a summer soirée all on their own.

But these days, with ice cream makers nearly as prevalent in home kitchens as food processors, and fancy ice cream ubiquitous in every corner deli, I knew I needed to do a little more than just pass around the pints.

I wanted to make something just as easy as that grasshopper pie, but updated and fresh. Something that took advantage of the variety of intriguing ice cream flavors now available, but that added a personal spin to make a dinner-worthy dessert, without (to be blunt about it) requiring much effort.

Once I got going, icy ideas stormed through my brain. I thought about ice cream pies made from homemade cookie crumbs, topped with whipped cream infused with aromatic spices. I thought about a play on tiramisù using vanilla ice cream in place of mascarpone. I thought about those fancy iced bombes my mother used to make in the ’80s, with two or three layers of bright-hued whipped frozen mousse packed into a decorative mold.

It was stunning, and quicker to put together than the time I spent locating the package of macaroons at the supermarket. 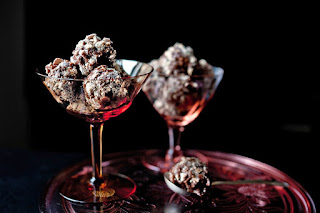 I also picked up some malted milk balls. When I got home, I froze them and pulverized them with a rolling pin, then used the crumbs, mixed with some malted milk powder, to make coffee ice cream malted bonbons. They are just the right size for noshing on straight out of the freezer, with no spoons required.

After these first two escapades, I learned that the key to making whimsical desserts with store-bought ice cream is patience.

One way to avoid all that waiting around is to serve sundaes. All you need to do is make the sauce ahead of time.

As much as I appreciate a traditional hot fudge number, it’s butterscotch I pine for. Mine is based on maple syrup with a good slug of dark rum to keep things from getting too cloying. Poured over scoops of ginger ice cream and showered with walnuts and dollops of thick crème fraîche rather than whipped cream, it was cozily familiar yet quietly thrilling to eat. 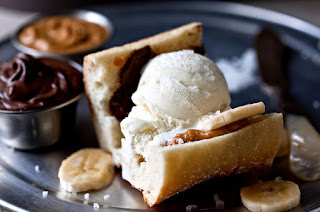 For my modern grown-up version, I scooped ice cream into sliced baguettes, then drizzled it with either pepper-spiked apricot jam or sea-salt-strewn chocolate nut spread.

These sandwiches were sweet, savory, sophisticated and laughably easy, just like grasshopper pie — even if their color wasn’t quite as dramatic.
Email Post
Labels: chocolate dessert fruit ice cream