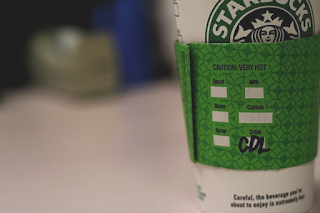 This morning my mother sent me to Yahoo News to see pictures of a chupacabra... while there was no chupacabra there was an article called "The Ultimate Guide to Starbucks Secret Menu" - and I had to share.
So I'm sure some people are going to give me shit but I'm a fan of Starbucks. They don't make the best coffee ever and there are certainly companies I like more. But over all they don't over roast or burn their coffee (something that I just can't stand) and they gave my little sister her first job (which she's excelling at) - so for that they have a soft spot in my heart as well.
Having someone on the "inside" is always fun. She comes home from after work and brings all sorts of concoctions she's created (although she does love to put the white mocha in EVERYTHING). haha. I love that places have "Secret Menus" I don't even have to know what they are. In a foodie world like today, where more and more restaurants are refusing any substitutions (even for allergies) it's refreshing to see some places allow for personalization (and no, I don't mean "Have it Your Way").
*          *          *
A list of the coffee giant's off-the-menu items
Frequenters of Starbucks know the situation all too well: You're standing in line, reciting the precise order of the five different descriptors that constitute "your drink," when you hear the person in front of you make a request so foreign sounding it completely throws your concentration.
A Zebra Mocha? A Grande Green Eye? A Captain Crunch Frappuccino? Say what? They may sound like a far cry from the standard drip cup or your simple Mocha Frappe, but these drinks are not Starbucks folklore. And really, considering that the coffee giant has in years past boasted offering some 87,000 different drink combinations, that such "secret" items exist should not be too surprising.
As it turns out, many of your fast-food and restaurant chain favorites have "secret" menus — places like Taco Bell, Wendy's, Subway, Chipotle, and even Jamba Juice. Of course, the one at beloved West Coast cult favorite, In-N-Out, is arguably the most famous. So well-known, in fact, that there's really not much "secret" about it anymore. Starbucks' off-the-menu items are certainly not as widely publicized as In-N-Out's, but they are known enough to the point where you won't get a dirty look from the barista when you ask for a Double Dirty Iced Chai.
Read on for an in-the-know guide to the "secret" drinks at Starbucks. Just remember that not all of the drink names may be universal so make sure you can at least explain how the drink is made to your barista.
Green Eye: A Red Eye or Black Eye, sure — that's one and two extra shots of espresso in a regular drip, respectively. But those that go for green get a sure-to-jack-you-up three shots of espresso boost to their cup of coffee.
Dirty Chai: A chai latte (hot or iced) with a shot of espresso added in. And if you want two shots? That's called a "Double Dirty" or "Extra Dirty" Chai.
Zebra Mocha: Sometimes also called a "Penguin Mocha," this drink combines the white chocolate mocha with the regular mocha for those who can't pick a favorite. Or, if you really want to take it to the next level, ask to have raspberry flavoring added for something called the "Red Tux" Mocha. 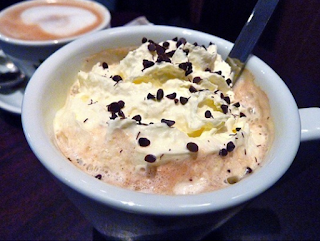 Chocolate Dalmatian: A White Chocolate Mocha with java chips and chocolate chips sprinkled in.
Cake Batter Frappuccino: Perhaps a little deceptively named, as there are no actual pieces of cake or cake batter in it, this beverage vanilla and almond syrup to a Vanilla Frappuccino.
Captain Crunch Frappuccino: No, this doesn't involve bringing the childhood-favorite cereal into the store and asking them to blend it in a frappe. Still, fans say that the combination of hazelnut syrup (though some folks contend it should be toffee nut) in a Strawberries and Creme Frappuccino is a dead ringer for the flavor of the cereal.
"Short" Drink: The Tall drink's smaller, less expensive younger brother.
French Press: Apparently if you ask, Starbucks will brew any of the coffee they sell in a French Press.
Super Cream Frappuccino: Like to go heavy on the whipped cream? Ask for a "Super Cream" version of your Frappe and you'll get half a cup of whipped cream blended in.
Affogato-Style Frappuccino: This one probably classifies more as an in-the-know than a "secret" one. Order any Frappe "affogato-style" and you'll get a shot of hot espresso added on top of your drink as opposed to having it blended in. 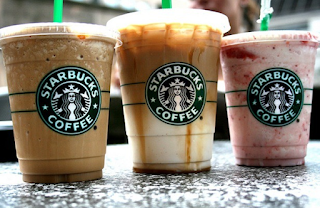 Triple C's: And the award for best alliteration in a Starbucks drink name goes to the Three C's: Cinnamon Dolce Latte with caramel syrup and chocolate mocha syrup.
Biscotti Frappuccino: This off-the-menu item sounds a little like a Starbucks version of a DQ Blizzard or a McFlurry, except you have to have to buy a package of biscotti cookies separately and ask your barista to blend them into your Frappe. Note: There seems to be some contention online as to whether or not baristas are actually allowed to put biscotti in the blender, so maybe only ask someone you know is willing to do you a favor.
Email Post
Labels: article cake chocolate coffee Starbucks