20 Somethings - Get ready for a "Thrisis" 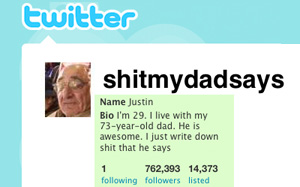 (CNN) -- Despite lackluster reviews and declining ratings we're holding out hope for "$#*! My Dad Says," the new CBS comedy starring William Shatner. No, we're not particularly big fans of the 79-year-old actor, but we do appreciate the prime-time sitcom's realistic portrayal of adulthood.

For those who don't know, the show is based on the wildly popular Twitter feed of Justin Halpern, a comedy writer who moved back into his parents' house in his late 20s and started documenting the hilarious -- and profanity-laced -- musings of his father.
With more and more adults living under the same roof as their parents -- 85 percent of college seniors planned to return home after graduation, according to a recent poll) -- one thing is for certain: For most 20-somethings, and a lot of 30-somethings, the road to becoming a genuine grown-up, minus the air quotes, is an increasingly long one.
Sure, delaying the onset of adulthood isn't exactly breaking news, but here's what is: People are finally paying attention to the late 20s and early 30s, that gray zone when you're not young enough to be young and not old enough to be old.
Forget the quarterlife crisis -- that post-college moment of clarity when you realize that working at a job actually requires -- you know -- work.
This is a "thrisis" -- an uneasiness people experience as they hit the big 3-0. Or the big 3-uh-oh, as we like to call it.
These feelings of anxiety crept into our own lives as we left our 20s. Our peers -- whether single or married, with or without children, unemployed or climbing the corporate ladder -- had to two primary questions as they neared 30:
• Is this what it feels like to be an adult?
• And am I normal?
(Spoiler: The answer to both questions is most likely "yes.")
While a discussion of 20-somethings inevitably turns into a lament about the younger generation, with their buffet-of-life choices, lack of responsibility, and refusal to grow up, here's the truth: This isn't your mother's 30.
These choices come with the pressure to not only have it all, but to make it perfect -- the HGTV-worthy house, gifted children, high-powered career, and soul mate. A tough current economic climate has made it difficult for people of all ages to mark the "traditional" adult milestones, making adulthood even more complicated.
In addition to the pressure for perfection, today, we also have the added anxiety of living our lives more publicly than ever before. Thanks to social networking and other forms of digital dishing, not only can we spend hours navel-gazing online, but we can also gaze at each other's navels via social networking sites. 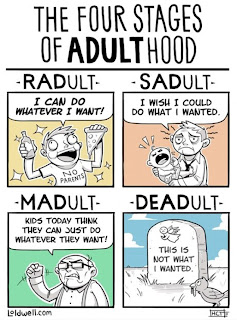 Now you can log onto Facebook or Twitter and find out that your younger cousin is pregnant (again), your best friend got a promotion, and your college roommate is engaged. It's easier to compare and contrast our friends' life trajectories to our own and then blog, tweet, text, and instant message about it.
While the thrisis isn't exactly fun, there is some good news: You'll realize that part of being an adult is understanding that "figuring it all out" is a lifelong task even for the biggest grown-ups among us, not a goal that must be reached by an arbitrary birthday. You'll also gain a lot a more out of a thrisis than you'll lose -- good stuff like maturity, self-awareness, and perspective.
Speaking of perspective, let's step back for a moment and not forget that 30 isn't exactly geriatric, for gosh sakes. Plus, more research shows we actually get happier as we get older. We should all be so lucky to have a life re-evaluation at age 100, although "century-is" or "hundred-is" just doesn't have the same ring to it as thrisis does.
Email Post
Labels: 20-something 30-something adulthood aging