Today the Los Angeles Times tweeted an article about how Five Guys and In-N-Out were beating out fast food places like Burger King and McDonalds (well "Duuuuuuh!" was my thought).
"McDonald’s and Burger King have tens of thousands of U.S. locations, but when it comes to consumers’ favorite quick-service restaurants, smaller companies like Five Guys, Chick-fil-A and In-N-Out leave their giant competitors cooked." (I went to a Chic-fil-A once and just wasn't impressed)
Again.... "Duh" was my first response (I think I need to work on my internal monologue vocab....)
There was another article...this time comparing Five Guys and In-N-Out.

"We chose this over In-N-Out," said Gueghlein, chowing down with family members at the Five Guys in Valencia that opened in January. She liked the fresh, flavorful burgers and hand-cut fries at Five Guys — as well as the novelty of trying something new. "It's the fourth time we've been here since they opened."
Now, I am a Southern California girl. There's no denying that. Doesn't matter where I move to or how long I'm there, I was born and raised on the San Diego beaches and eating In-N-Out. However, two years ago I moved out of California and away from In-N-Out.
I first went to Five Guys when visiting one of my BFFs in Seattle. OMG! It was so yummy. I loved that they were making fresh patties visible to the diners. I loved that their fries were thicker cut and had the skin still on them. I love that I can get a "Cheese Veggie Sandwich" (a burger with no meat for those of you who haven't been to a Five Guys) on days when I'm not feeling like meat. Mmmmm.

Then a few months back they opened a location about 15 minutes from my house. Yippee! I took my mother there as soon as they opened - she moved to California in the early 60s as a child and grew up on In-N-Out. First words out of her mouth after trying a Five Guys Burger "Oh my. This is better than In-N-Out. And I'm a California girl!" Haha.
"But to really make inroads here, Five Guys will have to get past a major hurdle: the intense loyalty of In-N-Out customers." (Well apparently not if their "loyal" customers are like my mother) 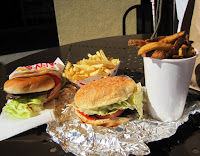 We agree the one downside of Five Guys is their buns. They don't hold up to the heft of the burger and toppings (but this is also a complaint with In-N-Out) - they need something with more umph.
Have you been to a Five-Guys? Have you been to an In-N-Out? Which do you prefer?
Email Post
Labels: burger Five Guys fries In-N-Out LA Times