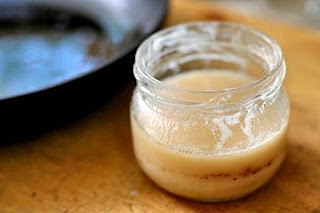 So I'm putting this out there now. If you're a vegetarian, devote Muslim, Jew, or Seventh Day Adventist....or if you just don't like/eat swine this recipe is not for you. If you're not open minded or adventurous in your eating you might want to join the non-pig eaters. Go to the next entry. It'll be better.
Okay. Are we alone?
Now let's discuss BACON FAT.
In my house growing up, and even now as an adult, having a coffee cup of rendered bacon grease in the refrigerator. It's something my German great grandmother taught my grandmother, who taught my mother, who has taught me.
For the longest time it grossed me out beyond belief! The cholesterol... the fat.... cooking with grease! Yuck! But the thing is we don't use it that often or in that much food. To help brown pork chops and the pork roasts. But the one area that we use it in - that often makes people gag unless you too had a German grandparent - we use it in Molasses Cookies!
It's an old German recipe (or so says my family) - using the bacon grease in place of butter or some other shortening. I've tried them without the bacon fat and it's just not the same. So today when The Stir had a chocolate chip recipe using bacon fat I was intrigued. It's too warm for baking but as soon as it cools down I'll be trying this recipe out.
Chocolate Chip Cookies With Bacon Fat
from Chef Ross Sveback
Ingredients 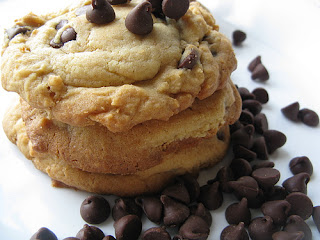