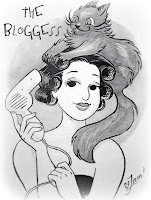 So hopefully you are all familiar with The Bloggess? I have a huge blog-crush going on with her...hopefully if the obsession goes too far someone will stop me before she turns on me like Shatner turned on her.
Anyway, The Bloggess not only maintains her own (hilarious) blog but she also writes for Sexis and last week she wrote an article called A Boob By Any Other Name and I had to share it with my readers.
Now in the article she explains these are names that Twitter's hashtag #NicknamesForBreasts show. Some of my favorite are:
The old stand-bys:
Knockers
The girls (My usual go-to name)
Ta-tas
Fun to say*:
Chee Chees (that's what my family has always called boobs when you're a little girl)**

Weirdly poetic:
Devil’s Dumplings
Adorable:
Dirty pillows (A friend also used to refer to them as "Naughty Pillows")
Kind of brilliant:
The Golden Girl***
Bert and Ernie
Frick and Frack
Thelma and Louise (because those girls are always in trouble)
*I also heard a joke (or maybe read it somewhere on FB?) that was "I have bigger balls than any man I know. They're so big God had to put them on my chest to prevent chaffing" (<--one of the nicknames from twitter was calling breasts "testicles" and The Bloggess had a question mark next to it).

**In my family we also refer to them as "ma-guppies" (a reference to a M*A*S*H episode where a Korean refugee child keeps calling Klinger "Mamasan").
***I totally love the idea of calling boobs "The Golden Girls" until you then start thinking of them as old, wrinkly and saggy. But hell if they're as sassy and raunchy as Betty White...I'm all in!!
Email Post
Labels: Blog breasts humor The Bloggess