Re"Mastering the Art of French Cooking" 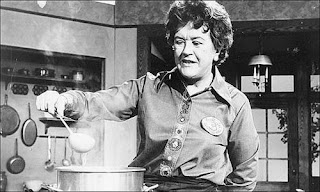 While I'm totally excited that Julia Child's "Mastering the Art of French Cooking" will be one of the pieces ushering cookbooks into the digital world...but I can't help but still be a sucker for a food-splattered-dog-eared-hard-copy cookbook.
*                *                  *
Adapting Julia Child for E-Readers
By Julie Bosman
Clumsily splattering a cookbook with bacon grease is one thing. Doing it to an iPad is quite another.
That may explain why cookbooks have been late bloomers in the e-book revolution, lagging behind other categories, like fiction, that have been widely embraced in digital form.
Yet cookbooks have recently begun to show signs of strength in the digital book market, bolstered by publishers who are releasing e-book editions of new titles simultaneously with the print versions and converting older, classic cookbooks into digital form. 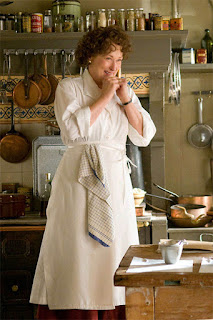 On Wednesday Alfred A. Knopf will release the e-book edition of one of the most famous cookbooks: “Mastering the Art of French Cooking,” by Julia Child, immortalized in the best seller “Julie & Julia” and its film counterpart, starring Meryl Streep.
The introduction of “Mastering” to the e-book library is not just a testament to the book’s venerable status and enduring popularity, but also to the publishing industry’s willingness to embrace digital publishing with all its quirks, including, for cookbooks, shorthand measurements like “2 tbsp finely minced shallots,” which appear in smaller type.
While most novels and nonfiction books are easily converted into black-and-white e-books, which can be read on anything from an iPhone to a Nook to a Kindle, cookbooks are not so straightforward.
“Cookbooks often have incredibly complex layouts,” said Jennifer Olsen, the manager of digital production for the Knopf Doubleday Publishing Group. “They are very tricky to produce as e-books.”
Knopf first tried to convert “Mastering the Art of French Cooking,” which Ms. Child wrote with Louisette Bertholle and Simone Beck and released in print 50 years ago, into an e-book more than a year ago. At the time the technology was not available to replicate Ms. Child’s distinctive two-column format, which allowed the reader to see the ingredients alongside the corresponding instructions in the recipe, step by step, rather than the more conventional format of listing ingredients at the beginning.
Judith Jones, the recently retired editor at Knopf who acquired “Mastering” in 1961, was one of the people who objected, arguing that the publisher should abandon the effort until an e-book could faithfully reproduce the original.
When Knopf tried again this summer, the production staff had the entire book retyped by hand, since no electronic file of the book existed. The illustrations throughout the cookbook — tiny sketches of sauté pans and freshly julienned carrots — were scanned at a high resolution so they could be transferred to the e-book. And the publisher managed to recreate the two-column format, just like the original version of “Mastering.”
Other features are purely digital: live links allow readers to jump to other sections in the book, as when Ms. Child suggests that cooks preparing Potage Velouté aux Champignons should also read the recipe for Fluted Mushroom Caps. And readers who are unsure what a roux is can click on the word and gain access to a pop-up dictionary entry. (It’s a mixture of butter and flour.) 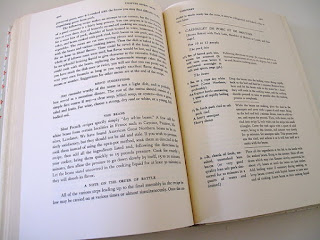 When Ms. Jones saw the new e-book edition, she was persuaded that it should be released.
“I suddenly saw the difference,” she said. “You really could almost improve on how you read the book.”
Some elements of the 752-page print edition, which has sold 2.5 million copies, have been lost in the digital version. The delicate font used in the book, announcing recipes like Fricassée de Poulet à l’Ancienne and Moules au Beurre d’Escargot, could not be reproduced in the e-book version.
And the book is better experienced on tablets than on dedicated e-readers. While it is possible to read it on a black-and-white Kindle or Nook, many of the design elements cannot be viewed on those devices.
Still, eager food writers have hailed the release as “a milestone of sorts,” as the blogger Cookbook Man noted this week. “Since Julia was a pioneer in bringing cooking to TV, it’s only fitting that her 1961 classic helps usher in the digital age of cookbooks,” he wrote.
At $19.99, the e-book version of “Mastering” is only a few dollars cheaper than the hardcover edition available on Amazon for $22.74. (The list price of the hardcover is $40.)
Paul Bogaards, a spokesman for Knopf, said the price was in line with some e-book editions of other Knopf cookbooks, like “Sunday Suppers at Lucques,” by Suzanne Goin ($19.99), and “The Mozza Cookbook,” by Nancy Silverton ($18.99). Shorter cookbooks in e-format can sell for as little as $12.99.
As publishers have produced more e-book editions of cookbooks and dozens of cookbook apps, the overall category has shown gains in e-book sales, according to industry data. Kelly Gallagher, the vice president for publishing services for Bowker, a research organization for the publishing industry, said that while cookbooks were still behind other categories, like romance and mystery, they had been bought in larger numbers throughout this year.
In the first quarter of 2011, about 6 percent of total cookbook sales were in digital format, Mr. Gallagher said. By the end of the second quarter, that number had jumped to 8.5 percent.
The number of published cookbooks, both print and electronic, have increased to 3,300 in 2010 from 2,643 in 2009, according to data from Bowker. Even higher sales of e-cookbooks are expected in the coming months, thanks to the proliferation of color tablets, most recently with the introduction last week of the Kindle Fire by Amazon. 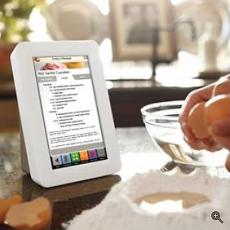 Sarah Rotman Epps, a senior analyst for Forrester Research, said that Apple sold 28.7 million iPads worldwide through the quarter ending in July. She now estimates that the company has sold at least 33 million of the devices.
Edward Ash-Milby, the cookbook buyer for Barnes & Noble, said that the cookbooks that had seen strong sales in e-book have tended to be those with a more narrative structure.
But print sales are still strong, he added. “Cookbooks are a very strong category in our stores,” Mr. Ash-Milby said. “They’ve got a great future in print.”
Email Post
Labels: cook book cooking Julia Child