I love when things just fall into place sometimes. Not wrong place wrong time but instead right place right time. For me today the right place right time was reading an essay by Erin J Aubry, called "The Butt: it's politics, it's profanity, it's power" (part of the "Body Outlaws" anthology.
As I write this I'm sitting on a small plane headed from Portland to San Francisco (eventually making my way to San Diego). When I say small plane I mean put your carry on luggage below because the overheads are the size of a bread box, four seats across small.
The airline doesn't matter.
What does matter is today, this flight, was the first time I EVER in my nearly 10 years of flying as an adult, had to ask for a seat belt extension.
I was mortified. 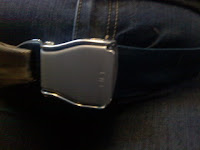 Despite being size 26, and having good ol' fashioned birthing hips and a big butt I've always been able to wear a standard airline seat belt.
Yes they've always fit snug over my hips but it's supposed to. Sometimes I've had to sit up straight, slip the belt under my belly to
have it sit across my lap.
But never have I had it not fit.
Not click into itself.
Thankfully I was one of the first on the plane and there were not that many people in the back of the plane when I slipped beside the flight attendant and had to ask for a "belt extension". The flight attendant smiled and politely asked what seat I was in as she handed me the balled up belt.
Did it have to be a different color?
Did she have to ask what seat I was in so everyone around knew the woman in 11D didn't fit in her seat? 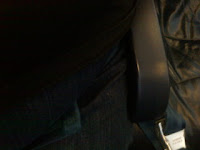 Now to be fair to myself I fit in the seat. My hips and thighs don't spill over into my neighbors seat. It's just the combination of my hips, butt and stomach just were two or three inches too big to fit into the airlines expectation of "maximum size".
No matter how you look at it. No matter what spin you put to it. It was still the first time I had the thought "I'm too fat to fly".
Enter Erin Aubry's "The Butt".
Now while I cannot claim to know first hand the social stigmas and perceptions the country/world puts onto woman of color and their butts. A number of things that Aubry discusses in her essay spoke to me and I could relate my own personal experiences of being a big butt
woman.
"I have a big butt. Not wide hips, not a preening, weightlifting-enhanced butt thrust up like a chin, not an occasionally saucy rear that throws coqettish glances at strangers when it's in the mood and withdraw like a turtle when it's not. Every day, my butt wears me...."
I often feel this way. That no matter what I wear, how I try to camaflage it, there is no hiding that I have a BUTT! Although (perhaps) unlike Erin Aubry I also have wide hips. And there are days when I'm convinced my butt and hips are teaming up and flirting with strangers when I'm not looking. Winking and giving come hither looks to every man on the street. 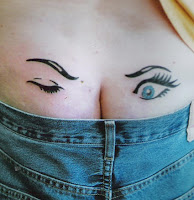 I have no control over it and it gets me in trouble. My butt/hips are out there socializing away and then when the men come up to me and use such original come-ons like "Hey there Momma" and "Mmm. Damn girl"- I have to be the bitch that turns them down... It also doesn't help that
I think my breasts are in on the scam with my hips and butt.
There are days when I just cannot stand my butt/hip duo and want to vote them off the island.
Days when it doesn't matter how many pairs of pants I try on I just can't find a pair that fits. Either they fit around my waist but have too much fabric in the seat so it looks lime I've got a load back there. Or they fit fantastic over my butt, with curves in all the right places but I can't make the button up. Because I'm telling you now I don't do elastic waist bands unless we're talking pjs or lounge pants.
Days like today when something as insignificant as an airplane seat belt makes me hyperaware that I have a "larger than average" sized body and society isn't sure what to do with it.
"I'll admit: For all my hand wringing, I'm growing accustomed to my butt. It's a strange and wonderful development....as I've gotten heavier I've actually gotten more comfortable with how I look....So what if America, in it's infinite generosity, wants to hp me get rid of this bothersome behind....More and more, my response has been: I am going to eat cake. I will wear the things that fit-whatever ones I can find-with impunity. I will walk this way. I don't have an issue, I have a groove thing. Kiss my you know what."

This last piece of Aubry's essay is really what sang out to me. I am currently near the heaviest weight I have ever been (actually the heaviest was approximately three years ago but only by about fifteen or twenty pounds more) but I believe I'm also the most comfortable with my body...until days like today.
(End Note. I returned via this same airline on my way home from San Diego. This time on a standard 747 and my seat belt fit just fine)
Email Post
Labels: butt embarassment flying hips weight