Holy Souffle Batman! Look at this pancake!!
That's no ordinary pancake (obviously) that's a Souffle Pancake (similar to Dutch Bunny's or German Pancakes). I've had Dutch Baby's before....and have tried some of a friend's German Pancake before but this just seems like a whole other variation. 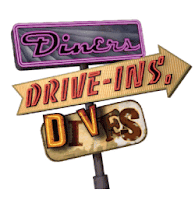 I saw this fluffy wonder of a delight this weekend on a DDD (that's Diners Drive-Ins and Dives for you non-Food Network people) episode. Guy was at Bette's Oceanview Diner in Berkley, CA and she's been making them for 17+ years. She apparently first found the recipe in an old magazine.
It just looked so yummy, and with my family loving pancakes, I had to try and find a recipe.
Enter my best (digital) friend Google. 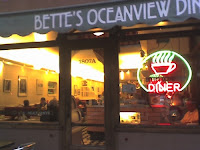 There were a few folks who found recipes for Dutch Bunny's; but those call for just mixing the eggs in whole. Bette's had her eggs separated and folding in beaten eggs whites - to give the souffle fluffliness.
Finally I found the one I think I'm going to try this upcoming weekend (I promise to share how it turned out)...I've also made changes to the recipe below based on what DDD showed being done.
3 eggs separated
1/2 cup half and half
1/4 cup flour
1 pinch salt
1 1/2 tablespoons butter, melted
1 tablespoon grand marnier (or whatever liquor you want)
1/2 cup strawberries + 1 tbl. sugar (or whatever fruit you want)

Beat two of the egg yolks with the half-and-half (reserve the third yolk for another purpose). Add the flour slowly, stirring just enough to combine. Stir in the sugar, salt, melted butter and Grand Marnier. 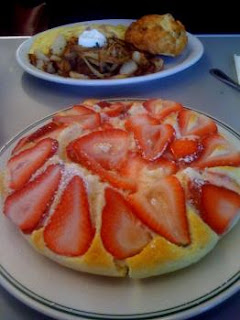 Beat the separated egg whites until they form soft peaks. Fold them into the batter and gently stir in most of the berries, reserving a few to place on the pancake just before it goes under the broiler. (Bette didn't put any berries into the batter until it had cooked some; she said otherwise they sink and stick to the bottom)
Heat a lightly greased 8-inch nonstick ovenproof skillet, or a heavy cast-iron skillet, over moderately high heat or until oil bubbles.
Pour the batter into the pan. Reduce the heat to medium and cook until bottom of the pancake is browned and bubbles appear around the edges, for 5 to 8 minutes. Arrange the remaining berries gently on top of the batter.
Place the pan 4 to 5 inches below the broiler and cook until the top of the pancake is brown and the center is just set but still soft.
Gently slide the pancake onto a warmed serving place, dust with powdered sugar and whisk it to the table. Serve with more sliced strawberries and raspberries.
Email Post
Labels: DDD Food Network fruit pancake recipe