Today's challenge is about my biggest embarrassment. Now I figure since I try to see life with some humor I'd pick one that, while embarrassing, is also hilarious (instead of the time embarrassment that ended with me in the bathroom of an airport crying my eyes out).

I first blogged this (funny) story in my old blog, Surviving 20-Something, I've copied it here for this challenge.

Normally when going around a game of "truth or dare" or even some (lame) team building activity when you're supposed to tell your "Most Embarrassing Moment" I come up with nothing. I draw a blank. No childhood traumatic event. No dress tucked into my pantyhose. Nothing.

Well after tonight....THAT ALL HAS CHANGED!

Before I continue let me remind you of the following:
1. I've only been at this school for 5 months
2. This was the company holiday party of 80+ people (most of whom I hadn't met until this evening).

So the party is going along just fine. I've managed to find something to eat and have visited the bar 3 times. I'm at a table with some people from my office suite and some people I'm only slightly familiar with. Things are going well. I'm comfortable. I'm laughing and having a good time and comes Jeopardy. 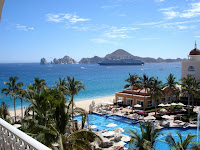 So the Advancement Department (i.e. $$) has put together a game of Jeopardy. Two teams of five and someone on the winning team could win a WEEK IN CABO SAN LUCAS!!!

My name gets called to be "Team Captain" of the white team (white vs red)! Okay. I never win anything but hey, who knows...maybe this time? So they finish picking teams (names drawn out of a hat style) and they ask for the team captains to come up to the front to flip a coin - seeing which team gets to go first.

And when I say "to the front" I mean at the front of this giant ballroom, all people's eyes on the impending coin-toss....remember 80+ people....

At first no one knew what happened. The MC (president of the school), the coin-flipper (member of Advancement Dept) and the Red Team Captain are all looking around on the floor for the coin. The audience starts murmuring and wondering why they aren't announcing if it was heads or tails. I make eye contact with the coin-tosser and tell him he's not getting his coin back. That's when EVERYONE realized what had happened and where the coin had "disappeared" to.

So of course, in case anyone missed that my breasts had been turned into a coin machine, the President of the school says into the microphone "I think we're going to need another coin"! 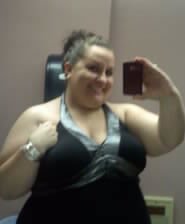 I'm sure I turned as red as a lobster! I've never blushed so hard in my life. As they're turned to the audience to find another coin I turn my back to the crowd (unfortunately this puts me boobs to face with my boss and her husband - both of whom were on my team) and fish out the coin. If it had landed directly in my bra - I might have left it there. But it landed between the outside of my bra and my dress. So I knew if I left it there it would eventually fall out the bottom of my dress. I'd rather fish it out then look like I shit out a coin while walking across the dance floor.

Although really. In the end I should have known...

When the girls are out - everything is in jeopardy of being "eaten" by my cleavage.
Email Post
Labels: boobs Christmas cleavage embarrassment fashion job party work