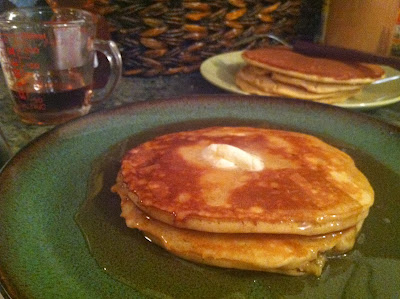 I'll admit. Normally, when it comes to pancakes and waffles, I'm a boxed pancake mix girl. Not because I'm in love with the flavor but it's just easy. I will also admit I'd never looked into how to make my own pancake batter so I always assumed boxed pancake mix was "easier".

My aunt came over the other evening to have breakfast for dinner, I had bought some delicious butter pecan maple syrup when we were at the pumpkin patch and I suggested we try it out. I was almost done with everything, just had to make the pancakes...that's when I realized I was out of boxed pancake mix. So online I went.

Yes, I made a few changes - like substituting eggnog for milk and adding about a teaspoon of cinnamon - but for the most part it was Martha Stewart to the rescue. They weren't as fluffy as I was hoping (but then it could be the age of my baking powder or the heaviness of the eggnog) but they were delicious nonetheless.

As for boxed pancake mix. I won't be buying any anytime soon. From scratch it is.