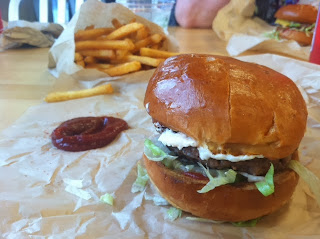 As part of my 30 During 30 goals I created a Portland Food Passport - highlighting either up-and-coming or highly-talked-about restaurants in and around Portland.

One of those places was Little Big Burger. A simple fast food burger joint with an even simpler menu.

After going to a rendition of Dr. Jekyll and Mr. Hyde, on Sunday, we swung by Little Big Burger to give it a try. One burger with cheddar, another with Chevre, an order of fries and beverages. 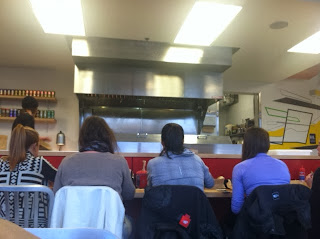 In the end I can at least say "I've gone"....but I don't think I'll be back. Aside from the fact the burger (which was about as small as my fist) was nearly four dollars, the burger was over cooked and chewy, the fries over fried and then sitting under the heat lamp for too long....they also don't ask what you want on the burger so all I ended up tasting was red onions, too much ketchup and the Chevre cheese (which was delicious and creamy).

Not to mention the bad 80s music playing and the cold unwelcoming "modern" metal and concrete setting. It was nice to have an open kitchen with a dining counter wrapped around. But really nothing made this place special. It was a Portland version of a fast food joint.
Email Post
Labels: burger food Food Passport hamburger Portland restaurant